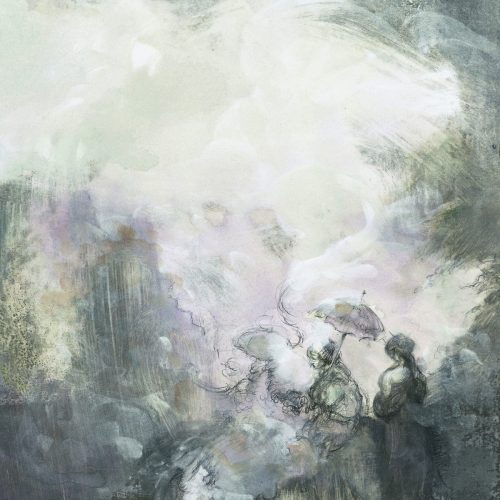 Paradise Lost was originally released as a cassette back in 2019.  As is the norm for many Andrew Chalk releases, additional details beyond the fact that it exists are quite thin, but this one takes that to an amusing extreme, as the Discogs entry for the original cassette notes “label and artist name are not listed on the release.”  That said, I believe I can say with moderate certainty that these two longform pieces were recorded on an 8-track reel-to-reel between 2016 and 2018 and that Chalk primarily played a synthesizer.  Also, his Ghosts on Waterbandmate Naoko Suzuki contributed some very well-hidden vocals and created the artwork for the original tape.

To some degree, it makes sense that this album originally surfaced as a very limited-small run tape, as it does not feel like one of Chalk’s more significant opuses, but it is quite an enjoyable and interesting release nonetheless.  In fact, the title piece feels like legitimately prime Andrew Chalk material to me, though I suspect many longtime fans will be more fascinated by the surprising and divergent “This Pendent World.”  Faraway Press  One interesting bit of information that I stumbled upon while researching this album was a blurb from Daisuke Suzuki’s Siren Records noting that this album “strongly recalls the atmosphere of home recording in the ’80s.”  I got exactly the same impression myself from the opening “This Pendent World,” as I had scribbled down that it felt like a duel between two very different artists from the golden age of private press New Age: one kosmische-inspired synth wizard hellbent on taking me to space and another guy who just wants to lull me into a blissful, bucolic reverie with some pretty string swells.

There are also some traces of a third guy who closely resembles contemporary Andrew Chalk, as there is a loose melodic theme of wobbly, liquid tones likely originating from an electric piano.  While that is certainly an odd collision to encounter on a Milton-themed Andrew Chalk record, it works surprisingly well, amiably and amorphously drifting and curling like a trail of smoke.  The following “Paradise Lost” is similarly form-averse, but in a much more compelling way, as its frayed and smeared swells of warm synth tones feel teasingly just out of focus.  Additionally lurking within the artfully blurred dream-fog are a slow-motion tumble of acoustic guitar fragments, ghostly traces of Naoko’s lovely singing, and probably some pedal steel too.  I am tempted to make a wince-inducing pun on the album title here, but “Paradise Lost” is simply too beautiful of a piece to deserve such an indignity, vividly evoking the slowly streaking and shifting colors of an especially gorgeous sunset. (Brainwashed)