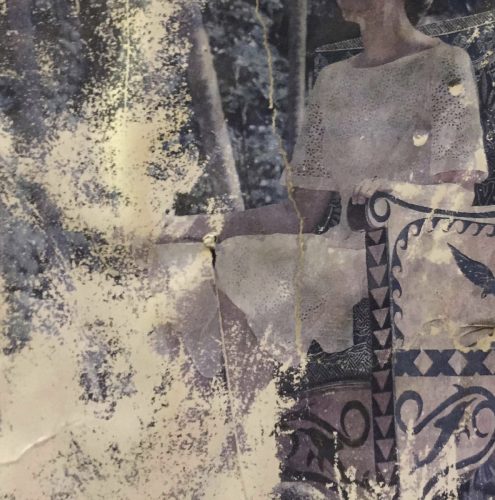 The final Astor release celebrates a 12 year old birthday with the combined audacious and unnecessary platform of sound bouncing around marble, traces elements of sacred zuehl and the buoyant pathos of russian souls. A helicopter solo; rewind. Hello intimacy and poor jokes (friends). Is this hypothetical unease – or just rubbish? Regional Bears do hope you enjoy this tip. And it is a tip.

Recorded at Cafe Oto, London on the evening of the 4th august, 2017 during the 2 day event “Fuck you wheres my suger”. Two nights around the themes of depression and hysteria curated by Lucy Stein and Mark Harwood.

Thanks to Shaun Crook for recording.

Though the release as a whole is quite the head-scratcher, the opening moments of Astor’s new tape The Aubergine Dream are, to me, profoundly disconcerting. “Aubergine dream. I love aubergine. I fucking love it,” states the immediately recognizable voice of a text-to-speech program. It’s not the use of text-to-speech itself, but instead that the actual text being transferred to speech is so colloquial and earnest that hearing it spoken in such a flat, synthetic manner is disturbing. In fact, though, most of the elements that make The Aubergine Dream so befuddling arise from this apathetic warping of humanity. The material on the tape was performed in 2017 at Cafe Oto, a London venue known for its ongoing support of experimental arts, but in trying to decipher the expected sonic space that a live performance provides we’re left floundering. The deafening contact mic shuffles and mysterious hum that materialize after the spoken introduction fade away around five minutes into side A, and after an extremely muffled bout of applause—and I wonder if it’s even the same audience that was watching Astor perform that day—we’re left in complete silence for nearly 30 seconds before the entry of some reverently struck piano chords and grimy hiss. Further on in the side the “live” identity of the piece becomes even less concrete as warbly tape manipulations distort what we’re inclined to believe are recordings of the surrounding environment, but at this point I’ve given up trying to align The Aubergine Dream with any preconceived musical templates I’ve stored away in my brain, and as the stuttering, segmented collages of side B unspool, it’s clear that’s the best approach. Unpredictable to say the least, endlessly subversive, fascinatingly strange, and ultimately sublime, Astor’s newest release is one I’ll be returning to many times. – Noise not Music