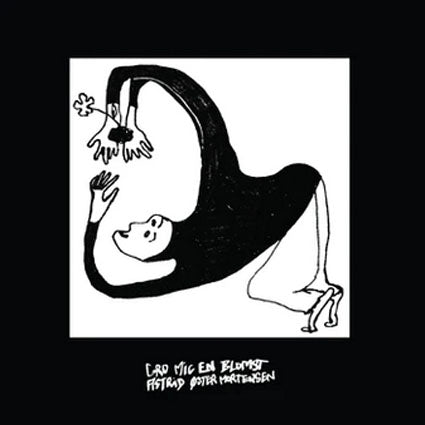 We first heard the Danish artist Astrid Øster Mortensen as a surprise guest vocalist on Gustaf Dicksson’s Blod album, Missväxt, which Grapefruit released in 2021. New in Gothenburg, the Denmark-born Astrid had been frequenting the Discreet Music shop where various musicians of the underground scene communed and shared their latest projects. Learning that she was a musician too, Gustaf asked Astrid to contribute vocals to Missväxt and it wasn’t long before Astrid handed over a master of her own music which completely floored everyone in the scene who heard it. The recordings eventually materialized as “Gro Mig En Blomst,” an LP which was released in a very small edition on Gustaf’s Förlag För Fri Musik label in March of 2021, causing a sensation of wonder and well-earned praise and some panic due to its scarcity.

‘Gro Mig En Blomst’ is at once wholey immersive and something quite rare- an infectious collection of essentially experimental music derived from familiar organic sounds stitched together with delicate, sometimes improvised music, poetry, and haunting folk melodies. Akin to the pastiches composed by the equally enchanting Gothenburg collective, Enhet For Fri Musik, Astrid’s album is mysteriously irresistible despite offering what most would consider a challenging listen. Astrid Øster Mortensen’s debut LP immediately became an essential release and sold through its 300 copies quickly before the ink was even dry on the superlative reviews. So, it was with great pride and pleasure that Grapefruit worked closely with Astrid to offer this new reissue of her debut album.

Herein you’ll find songs which often begin with chatter and ambient sound, with Mortensen seemingly extracting beauty from the random and chaotic, splicing in snippets of birdsong and rainfall as well as electronic noises. It might be tempting to assume these songs are accidental, wholly improvised, or captured moments due to the ephemeral qualities of the music and the ease of execution which lure us into the world Mortensen has created. But, it is actually evidence of the skill and finesse of a confident artist in full command of her medium.

‘Gro Mig En Blomst’ was recorded on the island of Brännö, next to Gothenburg, Mortensen’s home after relocating from Denmark. Her most recent, equally entrancing sophomore LP, ‘Skærgårdslyd’, translates as “archipelago sound,” a title that roots the release in the isolated natural environment in which it was made. However Mortensen does it and wherever this music springs from, it is sure to wind up close to your heart once you abandon yourself to its shimmering surprises.