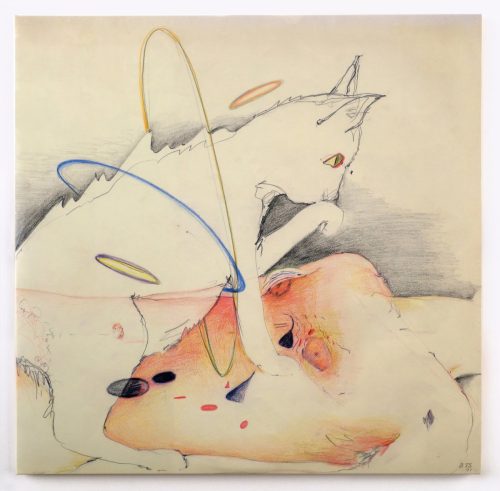 Born in Pasadena, CA in 1931, Barbara T. Smith is a performance art pioneer. This two LP compilation of audio recordings by Smith is from select early performances. It is not generally known that Smith’s events were almost always accompanied by an audio environment specifically created for each piece. The recordings presented on this compilation have been pulled from their original context for the first time, providing the opportunity to consider the aspect of sound as an integral and uniquely concentrated component of the artist’s work. In step with developments and techniques across the musical field, Smith’s sound works are intensely original and have a sense of humor that is unique and totally her own.  They include the use of bio feedback, synthesizer, sampled world music, cat purrs, aluminum rods striking the ground and original poetry.  Much of the audio included on this compilation was made with the assistance of housemates, close friends and colleagues including Joseph Byrd of the United States of America and poet Liz Rymland.

Smith studied art and comparative religions at Pomona College, graduating in 1953 and received her MFA in 1971 from the University of California, Irvine. She was one of the founders of the now legendary artist run gallery, F-Space, active from 1969-72 in Santa Ana, CA. Her earliest pieces took place in artist studios, in homes, on streets and beaches. She’s worked for decades alongside artists such as Nancy Buchanan, Chris Burden, Allan Kaprow, Suzanne Lacy, and Paul McCarthy, redefining the nature of art through the use of one’s own body, often at some personal risk.

Smith’s work has been included in major exhibitions throughout the United States and Europe.  Historic survey exhibitions include Whatever Happened to Sex in Scandanavia? at Office for Contemporary Art, Oslo (2009); WACK! Art and the Feminist Revolution (traveling, 2008-09); LA to Paris – 1955 – 1985 at Centre Georges Pompidou, Paris (2006); and Out of Actions Between Performance and the Object, 1949-1979 at the Museum of Contemporary Art, Los Angeles (1998). The artist’s work was presented in several Pacific Standard Time exhibitions organized by the Getty throughout 2011-2012 including the solo exhibition, The Radicalization of a 50’s Housewife, at the University Art Gallery, Irvine; and group exhibitions at the Orange County Museum of Art; Berkeley Art Museum; Museum of Contemporary Art, Los Angeles; 18th Street Art Gallery; Laguna Art Museum; and Pasadena Museum of California Art.