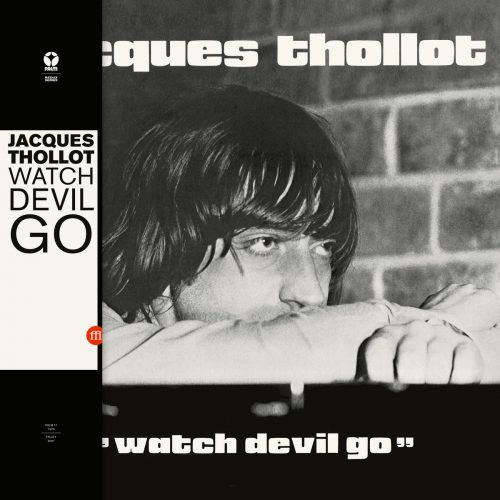 To write these few lines, we spoke to saxophonist François Jeanneau, an old friend of Jacques Thollot who also played on several of his albums, including the “Watch Devil Go” which interests us here. He told us a story which, according to him, sums up the personality of Thollot. A noted studio had reserved three days for a Thollot recording session. The first morning was devoted to sound checks and putting some order in the score sheets which Jacques would hand out in a somewhat anarchic manner. Then everyone went for lunch. When the musicians returned to the studio, Thollot had disappeared. He wasn’t seen again for the three days. When he reappeared, he had already forgotten why he had left, The music of Jacques Thollot is in the image of its’ author: it takes you somewhere, suddenly escapes and disappears, returning in an unexpected place as if nothing had happened.

Four years after a first album on the Futura label in 1971, Jacques Thollot returned, this time on the Palm label of Jef Gilson, still with just as much surrealist poetry in his jazz. In thirty-five minutes and a few seconds, the French composer and drummer, who had been on the scene since he was thirteen, established himself as a link between Arnold Schoenberg and Don Cherry. Resistant to any imposed
framework and always excessive, Thollot allows himself to do anything and everything: suspended time of an extraordinary delicacy, a stealthy explosion of the brass section, hallucinatory improvisation of the synthesisers, tight writing, teetering on the classical, and in the middle of all that, a hit; the title-track – that Madlib would one day end up hearing and sampling.

“Watch Devil Go” was in the right place in the Palm catalogue, which welcomed the cream of the French avant-garde in the 70s. But it is also the story of a long friendship between two men. Jacques Thollot and Jef Gilson had known and respected one another for a long time. Though barely sixteen years old, Thollot was already on drums on the first albums by Gilson starting in 1963 and would play in his big band (alongside François Jeanneau once again), ‘Europamerica’, until the end of the 70s.

In a career lasting half a century and centred on freedom Jacques Thollot played with the most important experimental musicians (Don Cherry, Sonny Sharrock, Michel Roques, Barney Wilen, Steve Lacy, François Tusques, Michel Portal, Jac Berrocal, Noël Akchoté…) and they all heard in him a pulsation coming from another world.