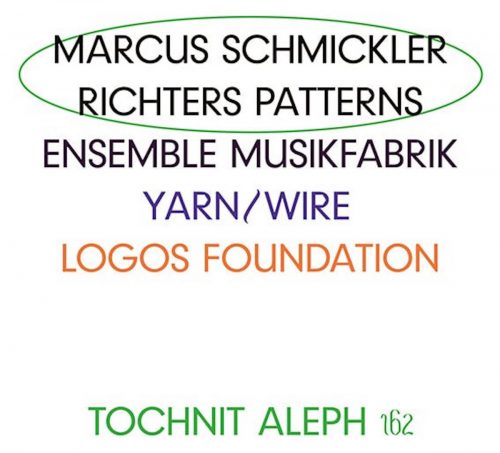 A double CD of works for chamber-ensemble collecting five of Schmicklers key-works composed & recorded between 2006 and 2016.

Edition of 400 copies in fullcolour 6-panel digipak with 8-page booklet.

The centre-piece “Richters Patterns” (2016) is a collaboration with German painter Gerhard Richter, “Kemp Echoes” (2013) focusses on instrumental sythesis, “E-UROPAS“ from 2006 is a long piece for quintet with electronics and narrators, “Fokker Bifurcations” (2014) a microtonal work for keyboards and mallet instruments, and “Ata Oto” (2016) a compositions for Robot instruments by Logos Foundation & computer.

Richters Patterns (2016)
is a collaboration among Marcus Schmickler, artist Gerhard Richter, director Corinna Belz and the Ensemble Musikfabrik. In 2011, Richter took an image of his work Abstract Painting (CR: 7244) and divided it vertically into strips and gave them to Belz who utilized specially developed software operations involving cuts, mirroring and reproduction to create a movie from these images. Schmickler and Belz worked in parallel, with the film and composition following their own independent logic. Schmickler’s idea was to extend Richter’s method to divide, mirror, repeat into sound and time. Richters Patterns was commissioned by Koeln Musik and had its premiere on September 9, 2016 at Cologne Philharmonic Hall.

Kemp Echoes (2013)
refers to a physical phenomenon in the ear discovered by physicist David Kemp in 1978. Otoacoustic Emissions (OAE) are signals in the ear (that can be detected with high quality small microphones) that are emitted by the cochlea, either spontaneously or in response to stimuli (frequently clicks). I have strived to create a piece that can seem ‘electronic’ to the ear without actually utilizing electronics.

Fokker Bifurcations (2014)
marks a departure into microtonal works for keyboards and mallets and maintains the composer’s penchant for juxtaposed fixed pitches with pitch continua. Recorded live at ISSUE Project Room, Brooklyn on Nov 7 2014. The recording has been edited for this publication.

E-UROPAS / Plurality of Centers (2006)
Shall we say goodbye to modernism? I dare to confront the myths of new music in this music theater creation. Layers containing the manifestos of Cornelius Cardew, Guy Debord and sound materials from six decades of the avant-garde create a collage that utilizes some of the formal principles guiding John Cage’s Europera V.