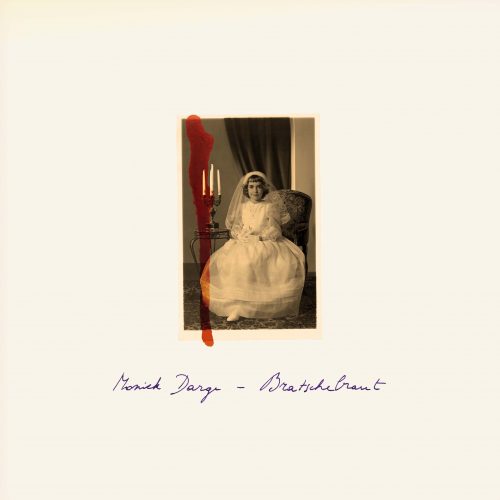 Released by Horn of Plenty

Following a deep-excavation of the Logos archives London’s Horn of Plenty presents ‘Bratschebraut’ – four works utilising prepared violin, electronics, tapes, and voice. These recordings are from the same era as Moniek’s classic ‘Sounds of Sacred Places’ LP. ‘Bratschebraut’ extends the story of Moniek’s work during this period: playful, intimate, raw, and quite unique. Although they were recorded across a seven year period and were not intended to sit together, the music on ‘Bratschebraut’, seen retrospectively, captures a pivotal era in Moniek’s artistic development. A period that saw her challenge, destroy, then create anew.

‘Bratschebraut’ both a significant addition to Moniek’s catalogue and an essential historical document.

‘Bratschebraut’ comes in an edition of 300 on beautiful red vinyl, housed in a full-colour sleeve with deluxe PVC bag and a 28-page booklet containing artist’s notes, previously unpublished photos, and details from the original graphic score for ManMo.