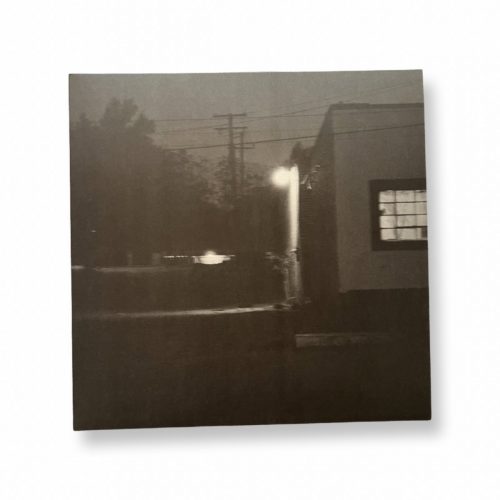 Horn of Plenty excavates the shadowy depths of the New Zealand/Aotearoa underground with Old Light, a collection of previously unreleased recordings by Nova Scotia, the experimental trio of Dean Brown, Dick Whyte, and Rick Jensen. Resting at the borders of free improvisation, noise, drone, and ecstatic ritualism, across seven tracks – recorded sporadically between the early to mid-2000s – the LP unveils a widely unacknowledged flowering of singular, real-time creativity from the southern hemisphere, with few parallels before or since.

Surveying late 20th century underground music – sounds that largely emerged before the internet delivered the illusion of interconnectedness – the most noteworthy often sprang from second cities, small towns, and backwaters, rather than cultured metropolitan centres like New York, London, Paris, and Tokyo. Boredom, marginalisation, and relative isolation seem to have been essential, counterintuitive components to the becoming of great art. Nowhere was this more true than in NZ/Aotearoa, the two remote islands in the South Pacific, vast and disassociated within their own borders, that few not from there could find on a map. Yet, between the 1980s and early 2000s, the country produced some of the most singular realisations of underground music of that era, beginning with seminal post punk gesture delivered by labels like Flying Nun – The Clean, This Kind Of Punishment, The Verlaines, etc. – before eventually coming to rest in the wilder reaches of experimentalism, via projects like The Dead C, Flies Inside The Sun, Sandoz Lab Technicians, Gate and A Handful Of Dust.

Almost by accident, it was the later movement to which Nova Scotia, the trio of Dean Brown, Dick Whyte, and Rick Jensen, would come to belong. Originally founded in Hamilton during the mid-90s as Negative Eh by three inseparable, 15 year old high school friends, during the second half of the decade they would release a handful of limited edition lathe cuts of DIY, glacial guitar and drum driven noise, before relocating to Wellington and reinventing themselves under the name Nova Scotia.

Nova Scotia encountered Brown, Whyte, and Jensen embracing a radically expanded approach to music making, incorporating a more diverse pallet of instrumentation – saxophone, electronics, concrete sounds, objects, violin, flute, guitar, drums, etc. – and touchstones drawn from Chicago and Louisville post-rock, stoner psyche, the experimental tactics of artists like Tony Conrad, and numerous free improvisational approaches from Japan, Europe, and the United States. Over the course of a small number of years, the band would live, sleep, and breath as a unit, slowly refining their sound playing gigs, often to empty rooms, with Birchville Cat Motel, Antony Milton, 1/3 Octave Band, and numerous jazz projects in the Wellington scene, while remaining – beyond a small handful in the know – almost entirely unknown inside NZ/Aotearoa as much as without.

Not without irony, Nova Scotia’s debut release, Tangiwai, issued by Peter Stapleton’s
Metonymic imprint in 2002, roughly corresponded with each of the band’s members beginning to follow divergent paths. Described by The Dead C’s Bruce Russell at the time as “Proof that there is a genuine groundswell of this abstract music.. from Nowhere NZ”. Before long Brown and Jensen would relocate to the UK. For the roughly 20 years since, the project has remained a live-only endeavour, reforming and playing during rare moments that the three members are in the same place, using recordings made during those performances to create three more full-lengths – Ramses II, Memphis, and Revolt Of Capricorn – that appeared between 2005 and 2009.

Old Light – Nova Scotia’s first full-length to appear in 13 years and the first to be issued on vinyl – draws on live recordings made across the years spanning the early to mid-2000s. Encountering the trio fully embracing a radical search for creative freedom, while dispelling all notions of dedicated instrumentation in an “anything goes” approach, the LP’s seven tracks cover a vast amount of ground, while retaining a unifying logic and sense of cohesion. Rather than the brittle angularity and simmering aggression that helped define the generation of NZ/Aotearoa artists that proceeded them, Nova Scotia’s sound – a distant cousin at best – draws from a different well, embracing a form of ecstatic ritualism bound to a fundamental human desire to commune through sound.

As though Faust, Marginal Consort, and the free-wheeling psychedelia of Parson Sound and International Harvester had birthed a delicate, inward-looking child, Old Light embarks on a journey through doomy noise dirges, clatter-threaded drones, spirited DIY clamour, and joyously experimental, real-time improvisation, culminating as a body of creatively brilliant sonority that recalibrates our understanding of what flowered from the NZ/Aotearoa underground at the dawn of the new millennium.