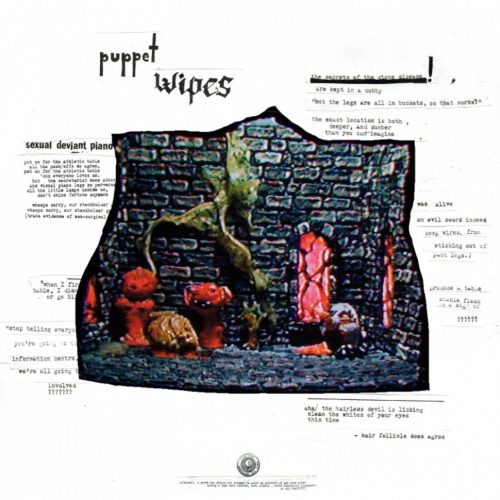 Pre-order. Stock due in 3rd week of July.

Puppet Wipes is the latest source of audio levitation for Arielle McCuaig (Hairnet,Janitor Scum, Vacuum Rebuilders) & Kayla MacNeill (Singing Lawn Chair, Vacuum Rebuilders) who conjure up their extraordinary odds bodkins out of Calgary, Alberta. Label fact checkers will note that Puppet Wipes are the 1st Canadian band ever signed to the Siltbreeze roster. That only took three decades. Anyway, their debut cassette from a couple years back, ‘It’s Called Punk, Are You Stupid?’-supposedly recorded in an hour-was a fetching melange of art damaged hoopla that sounded like it might’ve taken a spin around the Amos & Sara/It’s War Boys universe. On this one, the course settings remain seemingly intact, yet further realized. Plus it took a tad longer than 3600 seconds to behold. There’s a quote by the master of superfluousness, May Benot, that goes, ‘When the unconventionalists convey their art, which is by nature, unconventional, then does unconventionalism become part of a post conventionalist-conventionista?” Whatever you say, Mrs. Doublespeak. I’m not sure I even know what that means, but if I were a betting man, I’d say Puppet Wipes have it in spades. RIYL; Lemon Kittens, Your Mom Too, Doof, Dave E. McManus, XV.