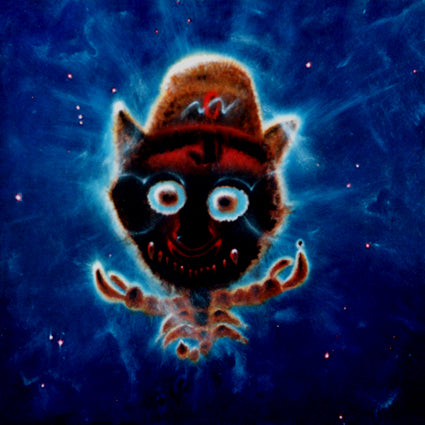 Like many of their peers, Sandoz Lab Technicians also ran their own label, Blunt Instrumentals, on which they released lathe-cuts of their own music, both with Sandoz, and in other configurations (The Cornelius Brothers, Unspecified, etc.); once word had spread, particularly thanks to the release of their debut album on Siltbreeze, their music also leaked out via an international network of small labels dedicated to underground experimental music. Plastic Carved Out In The Shape Of The Music features all their Sandoz self-released EPs, and a few extra bits and pieces, offering the listener an excellent overview of their music’s development, from their very first sessions, through to the wildly sophisticated free noise sculpting of their later material.

Sandoz Lab Technicians were always a curious proposition, even within the NZ free noise ‘scene’ (such as it was, or was not). Their early material has a particularly loose, suburban cast, not without some humour: the material sounds like it’s been recorded in scungy lounge rooms, dimly lit hallways, kitchens full of bric-à-brac, sharehouses with dusty curtains. Neighbours drop by to ask about their cats; guitars clang, drums tumble, all kinds of incidental instruments clatter and pulse, in a matter not unlike collectives like Smegma or Los Angeles Free Music Society (as mentioned in the excellent liner notes by Mike Trouchon).

As the group’s playing develops, the music becomes more expansive, patient, laminar. The audio verité recording techniques gift the music an unerringly right sense of space, place, and drama; the interaction between the musicians is always spot-on, growing in sensitivity and nuance over the course of these two discs, able to flip on a dime from all-in group-mind levitation to inhabiting parallel, coincident universes. It’s a bravura collection of music that tells us much about free and improvised sound from the South Island, while still holding its cards close to its chest. – Jon Dale