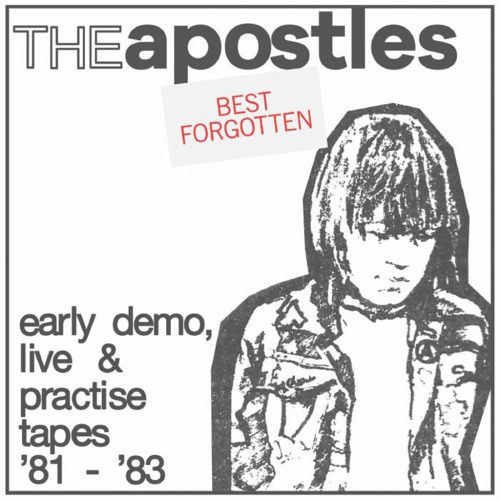 Founded in London in 1979 by a rotating cast of characters who came and went around its eventual frontman, Andy Martin, The Apostles were a product of their moment; a group of friends grappling with the political, racial, and cultural tensions of the time. Embracing unfettered creative experimentation, while exploring the personal as poetic, themes of queer liberation, radical leftism, and anti-racism, Best Forgotten – drawn from tapes recorded within the limited means of bare necessity in Islington & Hackney squats between 1981-1983 – offers a rare window into this lost world. 40 years on, within an eerily similar political and economic climate, its message remains as relevant and urgent as it was then.

Imbued with immediacy, the artefacts of lo-fi and DIY, and the spirit of chance, the material comprising Best Forgotten captures a fledgling band evolving through various line-ups, styles, and techniques with the means at hand: ramshackle instruments, rudimentary electronics, basic tape recorders, and boom boxes, and bookends a period of constant experimentation that defined their early years. While associated with other anarcho-punk bands of their moment like Crass, Poison Girls, Conflict and Flux of Pink Indians, this 86 minute collection of rare material – incorporating the early tape collages of fellow traveller Ian Rawes (later famed for his London Sound Survey project) and other avant-garde practices and approaches – sits more comfortably with the output of experimental post-punk bands like Lemon Kittens, Alternative TV or The Door & The Window.

While interest in the Apostles’ activities has only grown over the years, particularly after being namechecked by Ty Segall in a 2014 interview, these early explorations have largely remained inaccessible until now. In a 2009 article charting the band’s history, Andy Martin gives these early tapes a mere footnote and stated that, in his opinion, they are ‘Best Forgotten’. With respect, we beg to differ.

Best Forgotten comes in a hand stamped, stickered and assembled edition of 500 numbered double black vinyl copies and includes an A3 poster and 32 page A4 zine collecting archival photos and images from The Apostles tapes & zines along with liner notes and reflections on the tracks written by Steve Underwood (Harbinger Sound), Chris Low (former Apostles drummer) and The Apostles frontman Andy Martin, who gave this project his full support.