One of our favourite recordings now re-issued on vinyl for the first time. Anyone who knows me or has been at my place having a tipple into the wee hours knows this record as it’s my go to record to freak someone out as a ‘think you have heard everything’ tactic. The response from the unfamiliar hearing for the first time is always the same; absolute shock, laughter and jaws agap when things get really weird in this epic journey.

The Trees Community was a 1970’s Episcopal religious order that created and performed original world music on over eighty instruments. They were first a group of searching young people exploring many faiths and cultures. By the beginning of 1971, they became a Christian community that explored new music as a form of communion and worship. The Trees’s musical meditation called The Christ Tree showcases the band’s style as both experimental and experiential. Ethereal voices and complex avant-garde arrangements of ancient sounding folk music are the hallmark of the Trees Community sound.

Recorded in the Cathedral Church of St John the Divine in NYC this record is a travelogue covering and performing styles of music from all over the world all grafted on to an (accidental?) acid folk template.  The results are heavenly, trippy, beautiful and on occasion absolutely mind boogling. I wanted to re-issue this on PP some years back and contacted one the community who informed me it had already been snagged. Nothing appeared and I was thinking of making contact again when this suddenly and finally appears.

An all time favourite of ours and one of the essential ‘strange’ records in any genre which should really exist on a shelf in every home. We only got hold of a small amount of these so do not sleep on this essential item. I never rant so much, but this one is worth it, trust in me. Already sold out at source. 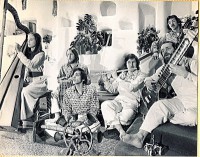 Specialist American record label Old Bear Records have recently released a double vinyl compilation of original recordings made by The Trees Community. If you are a music historian or a record collector keen to get your hands on rare and sought after music, the emergence of ‘The Christ Tree’ will be thrilling news for you.

The Trees Community were an ad-hoc assemblage of musicians, visual artists, actors, dancers and filmmakers who initially had no particular spiritual agenda other than a “search for the truth”. Cramming into a loft attic in a condemned building, they would study yoga, Buddhism, Taoism, Judaism and Christianity, and by the autumn of 1970 had settled on Christ’s gospel and an orthodox Christian faith.

The early days of the community were subsequently recalled by Katheryn Shishonee Krupa. She wrote, “Things started happening in our loft that no one could explain. For example, we’d say grace over dinner and be in grace, even as the food got cold, half an hour later. Sitting in silence, we’d then start singing. The quality of the sound surprised us, and thus we began calling ourselves a Symphony Of Souls. The name stuck and became our group’s first formal name. As we explored music through prayer, or prayer through music, every evening was different. One night might take us on a camel caravan along a desert road in Egypt. Another journey might take us on an ocean voyage on an ancient ship sailing on gently rolling waves under the moonlight. Visitors picked up instruments such as Balinese pot gongs, flutes, an Indian tambura or a heavy chain and played as the Spirit moved them. The music, nonetheless, remained global and culturally eclectic. And we always felt indebted to the exploration we did of other religions, spiritual practices and cultures to find both our faith and this new music.”

Katheryn continued, “A building condemned notice arrived at our New York loft when the leaves first started appearing on the trees. It was pinned on the wall next to a curtain leading to the attic, since we had no door to nail it to. Yes, we noted wryly, our spiritual centre of the universe will soon become a parking lot. What would our housing solution be? The answer: buy a bus. The vehicle was an old one (a GMC 1963 school bus) prone to breaking down (27 times in one year). But we managed to beautifully transform the vehicle into a travelling home for 12 humans, two cats, a small dog and eighty musical instruments. 12 of us set off on May 2, 1971, trusting disciples of the Lord, eager to see where he would lead us. For the next seven years, our travels extended throughout America and Canada. Our honed musical, theatrical presentation was shared in schools, churches, monasteries, Christian farms, coffee houses, ashrams and people’s living rooms. Occasionally, we also performed at giant musical festivals in front of thousands of people. Always, we sought God’s will. He drew us to help pick strawberries and work with Hutterites on a farm in Ontario. He led us to the Abbey of Gethsemani in Trappist, Kentucky, where we were drawn because of one of its noted members, writer Thomas Merton. There we found a spiritual retreat with the gracious monks who were the first to do a quality recording of our music. He called us to sojourn with nuns and monks living together in a Roman Catholic Pentecostal monastery/retreat centre along the Pecos River in New Mexico. We also helped pack pecans with the Koinania community (one of the first Christian communities to embrace the civil rights movement) in Americus, Georgia. Our community also lived and worked with the Episcopal Charismatic Church of the Redeemer in Houston, Texas.” 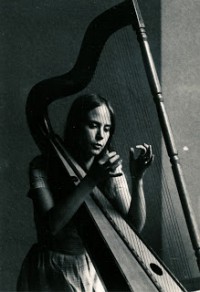 By the end of their six months in Houston, some members had left and others had joined. Remembered Katheryn, “Our bus, originally covered in Bible quotes, was repainted with a mural of trees. We called ourselves The Trees Community after the Isaiah reading, ‘You shall be called trees of righteousness, planted by the Lord for his praise’.”

As The Trees Community‘s musical expression developed, it mixed eastern and western cultural influences with adventurous abandon. Wrote Katheryn, “Many of the songs and crisscrossing melodies were initially written on the harp by me (‘Psalms’, ‘Eastern Sky’, ‘I Wander’, ‘How Long’, ‘Daughters’, ‘Your Name’, ‘Such A Love’, ‘Lift Your Weary Hand’, ‘Mary’s Song’, ‘Lamb Of God’, ‘Baptism’) and then embellished with various instruments by the whole group. A few songs were written by David Lynch (‘Fervently We Pray’, ‘The Bell Song’) or Stephen Gambill (‘Jesus He Knows’, ‘Comfortless’). Ragas and improvisational songs changed with each new performance reminiscent of our early days in the old, New York City attic loft.”

Eventually, in the spring of 1973, two years to the day they’d left, The Trees Community were back in New York City as part of the Cathedral Church of St John the Divine. Remembered Katheryn, “The Cathedral’s Canon West, Dean James Parks Morton, and writer Madeleine L’Engle [the Cathedral librarian who was to find international fame as the author of the children’s classic A Wrinkle In Time] all mentored us. Father West and Madeleine helped us develop our own monastic rule, consisting of scheduled, short prayer services throughout the day, like those in many monasteries. We built a small chapel as well as refurbished living space in an apartment near the church.”

In 1975, recordings were made and released on an album with an extremely limited pressing on the Community’s Pomegranate Records. It is now considered to be a classic album of ’70s Christian music. Archivist and Jesus Music expert Ken Scott wrote about it, “Stunning, beautiful and immensely creative set from four guys and four gals, all adorned in clerical robes and looking fresh off a ’60s Berkley curbside. There are some absolutely precious melodies within this moody mix of Eastern music, folk, avant garde and new age. A mere listing of the instruments ought to give an idea of the sound: folk harp, sitar, harmonium, pump organ, zither, recorder, flute, melodica, gong, bells, koto, cheng, belangi, sheng, so-na, Mexican bell wheel, tamboura, shenai. . . exactly where did they find all these things? Lengthy tracks like ‘Psalm 42’ (12:28), ‘Parable Of The Mustard Seed’ (7:15), ‘Psalm 45’ (8:35) that shift in mood from delicate and contemplative to tribal and cacophonous. Unusual vocal stylings at times include monotone droning or excited chanting (or in the case of ‘Chant For Pentecost’ rhythmically murmured in atonal harmonies at high speed). 60 Trappist monks from The Abbey Of Gethsemani join in the closing ‘Psalm 46’. A meticulously crafted masterpiece overflowing with originality.” 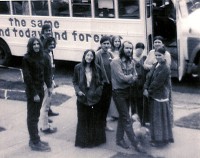 After the recording of their masterpiece, branches began to fall from the tree. By 1978, marriage, education and other careers meant that only Shishonee was left of the original members. She reluctantly sold the bus, while establishing the group’s archives. In 2006, CD re-issues of ‘The Christ Tree’ appeared in the USA and the UK. But it is only now with Old Bear Records vinyl release, remastered from the original analogue tapes by Timothy Renner and alongside live recordings made by the Monks of The Abbey Of Gethsemani in Trappist, Kentucky, that both record collectors and new young music lovers wanting to discover truly ground-breaking musical eclecticism can get the full flavour of what The Trees Community contributed to recording history. – Tony Cummings cross rhythms