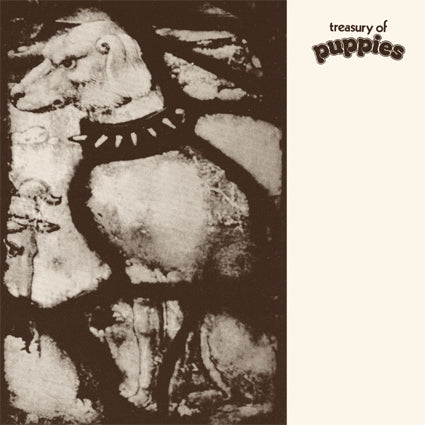 “This is the neat little dog with the dainty walk that looks like a lamb and can fight like a demon”. Mitt Stora Nu is the second album from the Gothenburg-based duo Treasury of Puppies, consisting of Charlott Malmenholt and Joakim Karlsson. Nine tracks of life-affirming downer music that were mainly recorded during 2021 and that shows a more varied and refined side compared to their first recordings, though maintaining the TOP-branded poetic playfulness and peculiar approach to sound art/rock n roll. While pieces like ‘Jag såg ditt ljus’ and ‘Rotten apples of love’ both capture the very essence of the bands’ sound and arguably wouldn’t have been completely out of place on the debut album, there’s larger-than-life epics like the title track and ‘Skriv när du är hemma’ brushing off most signs of the past. The strangely addictive ‘Dödens soffa’ sounds like a bunch of rats in leather jackets and sunglasses playing rockabilly. Treasury of Puppies are in their lyrics this time paraphrasing and recontextualizing everything from Mare Kandre, Edith Södergran to Edgar Allan Poe and Britney Spears, creating a comforting albeit perplexing own little twisted universe. It sort of makes sense that many parts of this album were recorded with old devices made for recording talk rather than music. Ain’t nothing but a hound dog! Mastered by Giuseppe Ielasi and pressed in an edition of 1000 copies. Comes with insert.