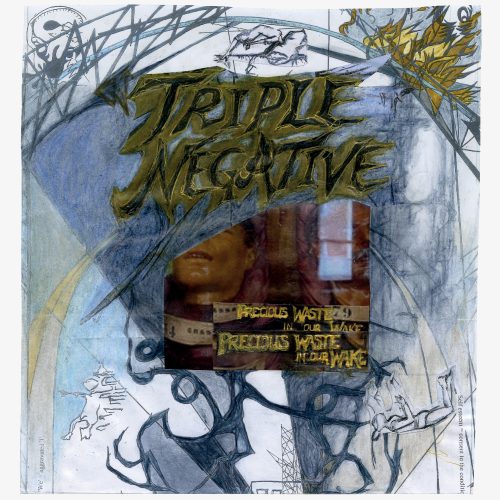 Debut full length from London based 3 piece originally hailing from New Zealand (Matthew Hyland), Germany (Anja Büchele) and Romania (Dennis Debitsev) Precious Waste In Our Wake (full title written nowhere: “The Fucking Terrible Receding Shapes, We Shed Precious Waste In Our Wake”) is an endlessly beautiful, dense and chaotic crawl through so many forms it can be difficult to ascertain what is actually at play. Ostensibly a ‘rock’ band carved from the same plank as previous outfits Philosopie Queen, The Mean Streaks, etc Triple Negative have shaken a somewhat complacent London with their wildly original blend of chaos and beauty rolling around a maelstrom of politics, spite and humour.  Bloodclaat Orange, Fatna Bent Lhoucine, The Associates, Aby Ngana Diop, Royal Trux, Brigitte Fontaine/Areski, and Babyfather are all somehow wished into the scenario, either suggestively, explicitly quoted or manifesting as some malformed degree of inspiration.

Following on from the quietly released TOWERS, OPEN, FIRE/Looking For Business 7″ on Penultimate Press towards the end of 2018, Precious Waste In Our Wake is a Malediction Forbidding Mourning, a portfolio of old pathologies folded into a sleek new nervous wreck. Precious Waste In Our Wake is a hulking ride of audacious rhythmic passages swaying alongside the meanest of melodies suddenly swept over by flights most fragile. Packaged in a high gloss sleeve with insert and precious zero by way of peers.