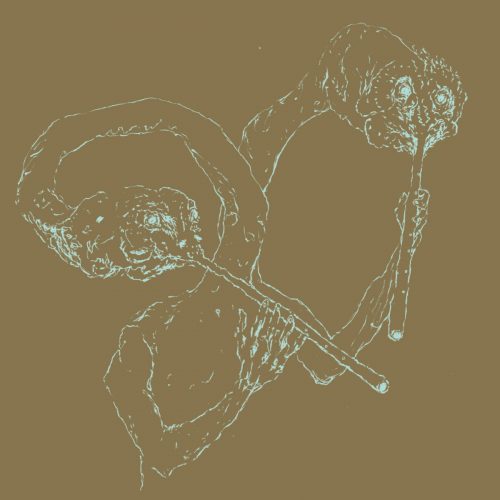 KRAAK is proud to present the first LP by Bloedneus & de Snuitkever, MILLI MILLE. Finally in wax, it’s Lukas De Clerck’s musical vehicle for his explorations with the aulos, that ancient reed instrument that mainly satyrs and archeological enthusiasts found beguiling. Equipped with his handmade pipes and the artful sense of devotion of a true modern-day aulete, De Clerck has dug deep into the technical and cultural peculiarities of this long-silenced instrument, paying it the kind of attention and mindfulness that Marsyas the satyr so lacked when he challenged Apollo and his lyre to that ill-fated musical match. But beyond merely resuscitating an ancient cult, De Clerck as Bloedneus gives the aulos a different kind of renaissance where its penetrating qualities are expanded and expounded to effects worth every nosebleed, paving new grounds in these practices of old.

MILLI MILLE hints at mysteries universal to humans of yore, present and morrow, like a Joseph Campbellesque recounting of transcendental journeys through drones and extra reverb. Elegiac modes encounter pastoral vibes that are punctuated by sly baroque flourishes, all pointing to the timelessness of the aulos’s sound – one can easily imagine its power of enlightenment through many ages. Yet in MILLI MILLE, an insistence on the fickleness of the instrument surfaces through disorienting, perception-shifting blasts and a compulsion to push the aulos to its fullest and most destabilizing potential. This is the flavor that Bloedneus & de Snuitkever imbues into that dormant canon, one that permeates the atmosphere long after the last note puts an abrupt end to these vibrations. The satyr’s song rings on, leaving the air abuzz with a timeless pulse that holds the promise of sounds still to be unearthed.