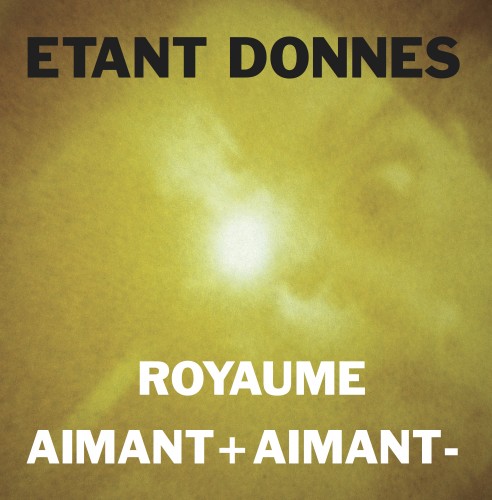 Royaume / Aimant + Aimant – is second in the three part re-issue series focussing on the works of Etant Donnes based around field recording
and voice.

Royaume (originally a CD on Touch, 1991) is made up of 4 tracks and is a kind of purifying travel through the four elements which symbolically refers to the light evoked by the colour green, an allegory of the grail and of the light- carrier angel. As to the poems, they tend to amount to their essentials, as is the case in Matin which is both Taoist and surrealistic.

Aimant + Aimant – (originally as a split 10”/CD on Danceteria,1992) presents itself as a magical alchemical mantra based upon the force of love, the force of life. Two pole like two bodies like two hearts like two magnets.

How beautiful your eyes are when they look into the void »

The wind, the sea, the breath, the fire.

Nothing more than nothing.

Everything is in everything.

Like true buffoons from ultra – world , Eric and Marc Hurtado succeed in achieving what many sages consider to be the very purpose of magical art : to create one’s own ritual and , being one’s own referent, to become a vibrating point in the cosmos and be a receptacle for natural energy, like those bright patches or that black point recurring in their magical  music, real poems-paintings and irremediably aiming , like an insect caught between the circle and the cross, in the heat of the sun in an attempt to merge with the Whole. – Stephane Duval

The wind, the sea, the breath, the fire.

Nothing more than nothing.

Everything is in everything.