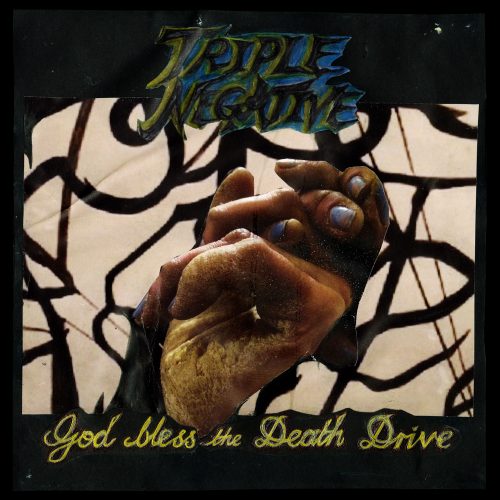 Literally taking off where the acclaimed Precious Waste in our Wake LP finished off, London based outfit Triple Negative return with another exemplary amplified jigsaw puzzle. The playback of this reality is garnished with humour, bedlam, beauty and a robust fear of the predictable. As payback for your acknowledgment our international line-up deliver a disparate mix of genres and histographies rendered into a devious dish of rhythm, song, balladry and nerve.   This is Not This Heat.  A.Kostis/Kostas Bezos’ ‘Stin Ypoga’ (1930) is the template for Bad emotional investments whilst the haunting Fine Cargo Lacquer takes flight from the morbidly on point novel The Death Ship by B. Traven.  God Bless the Death Drive could be construed as a compass to navigate the wayward wonder we inhabit or it can just be enjoyed. This second full length steers into scathed realms of everyday junk and poignant punk, all pressed down on the lowest quality ethylene and chlorine.  Triple Negative return with another stamped digest of hope as joke, noise and song, rollicking rhythm and seasick soul.  Edition of 500 copies in high gloss sleeve with printed comic book inner sleeve.

Precious Waste in Our Wake, the mysterious UK collective Triple Negative’s debut LP from last year, was and is many things: one of my favorite releases of 2019, the oddest and most compelling contemporary remnant of circa-1980 avant-rock explorations, a fittingly surreal soundtrack to our progressively deteriorating society and world. God knows what sort of headspace these mysterious magic-molders place themselves in to create this bizarre and befuddling music, but there seems to be no shortage in its supply because another full-length declaration has already surfaced less than a year later. When God Bless the Death Drive is said to “literally [take] off where… Precious Waste in our Wake finished,” it’s pretty much accurate; the mastering is louder and clearer, and “Bad Grace” begins with a propulsive, bouncing gallop of minimal percussion and blown-out vocalizing that does contrast with the drugged-out lethargy of the grooves on its predecessor, but listen to the two back to back and the momentum transfer is undeniable—”MERCURIAL SEAL / SINKINGSINKING SUNK” and “Bad Grace,” despite sounding markedly different, continue into one another. It’s a nice touch that meaningfully links the albums despite the new direction that God Bless takes. With bone-dry guitar tones and dusty, windswept percussion recordings, songs like “Bad Emotional Investments” become worn, sun-cracked psychedelic ballads, while the apocalyptic strings and winds on “Pugno Di Mosche” and distant churn of “Low Noon” allow some of the familiar smog to seep in. A soothing accordion and intimate vocals even make “Fine Cargo Lacquer”—dare I say—pretty. The level of coherence across God Bless the Death Drive is variable, to say the least, and this range makes it even more difficult to fully digest. The three-track stretch of “See It Slay It Sordid,” “Nag Head’s Spools,” and “Your Pretty Mental Health…” alone is a dense Twin Infinitives–tier conundrum. At first I found myself thinking, well this is not what I expected, but I quickly realized that’s a stupid thing to even consider when Triple Negative is at work. As Mark Harwood states, you can always rely on their music to possess a “robust fear of the predictable.”

Triple Negative’s debut LP ‘Precious Waste In Our Wake’ may have been my #1 of 2019 and ‘God Bless The Death Drive’ picks up right where that one left off. Someone once told me a member of Sydney’s most cacophonous “post-punk” group The Slugfuckers ditched his involvement in the subversive-youth-music scene and became solely interested in African music. At points Triple Negative sound like what could have been if that interest merged into the existing chaos of The Slugfuckers. I hope I’m not painting a picture of conservatorium trained polyrhythm groovers, as this is some apocalyptic, attuned to the ancient rhythms of Middle-Earth shit. Like if This Heat was armed with dirty mattress-ed sharehouse equipment, or a Scott Walker record produced by Small Cruel Party. It’s a distinct approach being a “lo-fi” uuuh “rock band”, I guess? I don’t know if there’s any kinship with Penultimate Press labelmates Księżyc but there’s a link to some mythic European folk stylings, although abstracted in very different way. A band like no other!

I keep missing this lot live which means I keep missing out, I hear. The first time I got hold of a Triple Negative album, me and my mate Louis listened to it twice in a row at the wrong speed, but I enjoyed it just as much once we’d got it back up to pace, concluding that the best rpm for enjoyment depended on one’s mood. Anyone else feel like there’s something brewing re: a new generation of oddball gnarly post punk bands of various stripes? If there is a second wave coming, this lot are at the vanguard, maybe a bit off to the side.

Without wanting to trivialise their work, it is the sort of record I like listening to when I have to go and buy shoes. It pipes in a stagnant, seething, undertow – a dirty and alive algae of sound, to counteract the hot discomfort of strip lighting and mass manufacture in the New Look shoe section. It reminds me I don’t really have to do this, and I have not been totally consumed by the man. It can compete with Mars on this front, meaning it’s definitely going somewhere.

All aboard! The dark, dislocated return of you-know-who rattles with instinctive, subliminal voodoo ENCHANTMENT. Yes, if trance was the gradual appearing and reappearing of rhythms between the eloquent swells of fragile, drone-folk cascades and spiralling, distorted madness, like the emergence of a path to some uninhabited tidal island, then….this be trance!

As with “Precious Waste In Our Wake”, it’s hard to isolate and recall precise moments from the fluidity of this full-length, however, before you wholly lose your bearings, it’s clear that the opener – “Bad Grace” – stands TALL amongst the finest examples of Trip. Neg.’s (sorry) own tunnelling, disintegrative dialect. That said, the clearest break in the tide of textural immersion brings forth “Fine Cargo Laquer”, which for me is Triple Negative’s most realised SONG (in the traditional sense) to-date, with Anja’s voice singing a hopeless, lonely-is-the-ocean / cruel-is-the-shore lament over weather-beaten chords and half-cut, death-letter riffs.

Total last evenings on earth clobber here. A chaotic yet finely tuned, isolationist but utterly destructive BOMB of an LP that never let’s up in celebrating self-devastation, as if the pleasure principle merely began and ended on Janet Jackson’s third album.

I’d been thinking about this record lately. I’d bought it on a whim in the Summer, and after listening to it a lot for a month or so, the Triple Negative LP had fallen to the back of the pile as I kept accumulating new purchases. And I missed it. So when I saw it in some year-end best-of list (things I peruse riddled with anxiety, thinking I suck for not having listened to enough music this year) I immediately went to the shelf and put it back on the turntable.

Triple Negative sound like a radio playing in a comic book. Fragments of sound pop up like fishes’ mouths in a pond of static and tape hiss, sometimes speaking the language of a 1930 Greek folk standard, or of tortured muzak mixed with trance-like chants and the sound of banging on metal, or of a sweet ballad for voice and a weary, huffing organ.

It’s one of those impenetrable sort of records, one could only tentatively connect it to a vague atmosphere, a Russian novella feeling, a quiet, composed sort of tale of black magic, the nautical theme of the comic on the record’s sleeve only adding to this impenetrable narrative fog.

Having been recorded on tape over the course of 15 years, God Bless The Death Drive sounds like layers of dusty recordings on top of older, dustier recordings. Tape loops, winds, things that squeak, grind and squall interact with muffled vocals, guitars, and percussions building trembling, precarious songs that are as unpredictable as fascinating.

I wasted a lot of your time on GRRAWR trying to understand why I enjoy free, abstract music, and there isn’t a real reason, at least not a fixed one. Maybe today I feel like listening to God Bless The Death Drive because I want to be challenged. Or I want to close my eyes and feel like I’m on a ghost ship, floating on a sea of tape glistening with shards of punk sensitivity. Or I just feel like annoying my partner. In any case, this is a challenging, freeing, puzzling and inspiring record. Dive in.