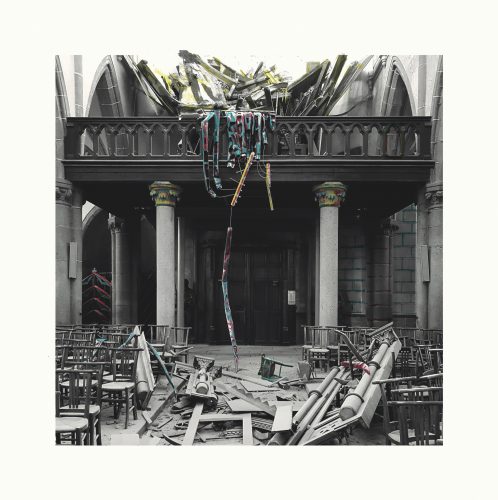 Pancrace is a quintet from France comprising Prune Bécheau, Arden Day, Julien Desailly, Léo Maurel and Jan Vysocky. Pancrace began with a residence in 2015 at the Saint Pancrace church in Dangolsheim where the instrument inventor Léo Maurel resides.

Pancrace’s debut self-titled double lp was released by Penultimate Press in 2017 and garnered much praise from across the community, ending up in many end of year lists including The Wire magazine’s best releases of that year.

Following the release of the double Pancrace vinyl the quintet toured around Europe. After the first record and subsequent tour the band were despondent that the main character of their story, the church organ, was not there. They took on  tour some organ pipes, bird calls and other things which could recall the church organ but this intrinsic element was still missing. A series of meetings and chance encounters resulted in the band developing their own organ which they named “ORGANOUS”.

The approach of Pancrace is based on the physicality of sound, a choice of specific tone qualities within a given spatial contextual awareness. Therefore the manufacturing and usage of the musical instrument are constantly reassessed. Consequently, playing with the mechanical aspect of the instruments is central to their musical approach and narrative. Designing an unbound pipe organ – though emulating some of the mechanical idiomatics of the initial Pancrace church organ – seemed the obvious way to gain more spatial control over a vast choice of places. This allowed them to approach their music from a totally new angle and work from within the organ. The results of these experiments are captured here, on their second opus, Fluid Hammer.

“ During the 2017 OrgelFesl in Waldkirch, we discovered Wolfram Stuetzle’s workshop, he is a church organ maker. In his attic we discovered thousands of old pipes and other elements for organ making. It was here we had the idea we could one day have our own organ for Pancrace. Thanks to his help, we started to collect some parts in his attic. We also met another organ maker Stefan Freisen who gave us an old bellow which he used as a flower pot in his garden and I also bought some of his 80 year old electromagnets. In January 2018, we were all together in Marmoutier to discover the possibilities of MIDI controlled organs. A month later, the organ “ORGANOUS “ was built in my workshop.” – Léo Maurel

This new beast of an instrument, somewhere between a spider or an octopus, lead Pancrace to compose from the frontality of the instrument as well as with the interactive tone possibilities brought by other instruments. With its six panels display (two bass registers, two treble and a pair of crumhorns) the organ projects sound like the musique concrèt Acousmonium giving the listener a spatialised perception of a wide range of tones and harmonics. Unbounded, the pancrace people have achieved a whole new cosmos of sounds focusing on sources rather than reverberation. Here the ORGANOUS is both the process and the context.

Fluid Hammer is the result of the research and experiments undertaken with the ORGANOUS and other instruments. It takes flight from their debut unravelling new entrancing avenues of this unique outfits vision. Fluid Hammer is a more rhythmic and percussive affair than its predecessor, bringing to mind the experiments of Conlon Nancarrow as well as fairground barrel organs. The wide range of polyrhythmic patterns generates a constant tension between the machine and the human play.

During their recording on a sound stage in Albi the musicians noticed right in front of the theatre an old fashion shop selling water pumps from another age. Walking into the “Gaubert pumps” shop was like entering a time warp reflecting by an uncanny entanglement the layers of history the ORGANOUS encapsulates. The voices one can hear on Fluid Hammer are field recordings of the Gaubert father and son. The shop no longer exists, oddly.

Eschewing the more melancholic end of today’s ‘organ playing’ this is playful and bright with moments of mirth amongst the exotic new sound world Pancrace manifest.

The ORGANOUS has also been included in works by sound artist Tarek Atoui who commissioned Leo Maurel to manufacture an organ designed for hearing impaired people and Heiner Goebbels commissioned the instrument for his show, In Vivo Danse – CAMPING during the IRCAM Manifeste Festival 2018.

Throughout the double albums 17 tracks one is exposed to a wide variety of Pancrace potential along with the sprinkled conversation with the makers of the water pumps, (reproduced in English inside the sleeve). At once playful, intriguing, surprising and warm this is an exceptional sonic experience from one of today’s most exceptional units.

Lot of excitement over the first Pancrace album that came out in 2017. The follow-up by the French quintet is not so much a departure as starting over in a completely different way – I doubt anyone expected something like The Fluid Hammer. The instrumentation throughout consists of a freakish amalgam of MIDI-controlled pipe organ, toys and radios with mediaeval folk instruments like hurdy-gurdy, fiddle and Uilleann pipes. It’s modern-day tech, high and low, put to use on ancient noisemakers. The sound is rough and guttural, machine-bowed strings mixing with wheezing pipes pushed to extremis by computers. The combination of instruments works like a single, huge, ramshackle pneumatic organ wound up and let go.

It simultaneously recalls Ligeti’s mechanical pieces, folk music from some remote region of Europe, and a rediscovered archive of tapes by some obscure outsider artist – all while resembling nothing like anything you’ve ever heard before. The sound is delightfully baffling, like discovering an entirely new, alien culture. The paradoxical elements give the music a timeless quality, that could have come from this or any other century. The novelty of the sound doesn’t wear off, as the group introduce new textures and effects on each of the LP’s four sides. Each side adds a new dimension, as the bucolic early tracks change into chittering Ligeti spoof ‘Etude aléatoire’, or the percussive effects established on side 3 with ‘CSO’ and ‘Stridulations’. Side 4 starts out unexpectedly funky, sort of, with bassline and rhythm before dissolving into a swooning, soaring cloud of colours and shifting tonalties on ‘Nothing but the Place’.

On each side, one track gives way to recorded dialogue (in French), as pump shop proprietors Gaubert père et fils (est. 1872) discuss the business of pipework and pumps, motors, the album, tapes, cheap imports and the internet. Their store happened to be across the street from the hall where recording took place. Their discussion adds to the folkloric and archival atmosphere of the music as well as adding a kind of parallel commentary of the work going on behind the record. (Pancrace started out as a residence with the instrument inventor Léo Maurel; it’s easy to assume at first that the talk is Maurel discussing his own work.) The album rewards repeated listening, both for deciphering the complex patterns and musical details and for exploring a deeper meaning behind the music. When so many artists are tempted to tack on a ‘meaning’ to their work, The Fluid Hammer effortlessly raises questions about art relating to society, meshing the past with the future, and meta-commentary on the creative process and labour, all embodied in the medium of fun, intriguing music. A remarkable achievement. – Boring Like a Drill

Pancrace, Pancreas, St Pancras International, Pancreatitis, Pancake Tuesday. However you want to mangle their name, the French quintet’s latest, a double gatefold, is so strange and so absorbing it’s taken two weeks for us to stick our heads above water to shout about it. If you’re familiar with their first, self-titled LP you’ll already be keen to investigate this one – and happy to discover they’ve pushed their muse even further on The Fluid Hammer, leading us Pied Piper-like down a garden path of thorns (?) to some kinda grotesque/beautiful medieval puppet freakshow (?!). In the same way that Księżyc plunge backwards and make the old-sound-new-sound-old, Pancrace create a very REAL time-warp with their “spatialized and midi-controlled” pipe organs, toys, hurdy-gurdy, violin, Pi-Synth, Uilleann pipes and – of course – antiquated water pumps overlaid with field recordings of a French pump-merchant and his sun explaining how these artefacts work. Whatever floats your hammer!

Over 17 tracks the Frans Zwartjes-esque pastoral stillness and lyricism of tunes like ‘In the Evening’ are interspersed with passages of levity and mischief (see, for example, ‘Cow Patch’). Pushed to think of accurate precedents for The Fluid Hammer and its strange synthesis or the mechanised and the improvised, nothing quite seems adequate, but in the futile churning names as disparate as Pierre Bastien, Akio Suzuki, Senyawa, Brannten Schnuere and Svitlana Nianio have come up. Absolutely walloping and highest recommendation. – Low Company